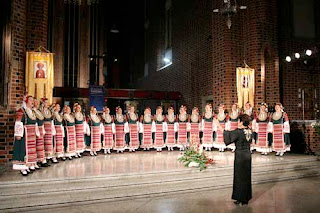 'The present CD offers to the admirers of The Mystery or Bulgarian Voices famous folk choir the unique opportunity of once again relishing part of the unmatched Bulgarian folk treasure-trove - old Bulgarian Christmas songs performed on Christmas eve and songs for health, happiness and fertility, done on St. Lazar's Day, Saturday before Palm Sunday. The Christmas-time songs are sung by young men at peasants' home for health and good crops. They differ considerably in sound compared for instance with the traditional European Christmas carols and are characterised by optimism and fiery dance rhythms, a variety of metre in the asymmetric measures - from 5/16 to 17/16 in a multitude of combinations.  The songs and games on St. Lazar's day are performed by girls and unmarried young women on the day of Lazar's resurrection. The lazarki also have special songs for each element of the custom - songs on the way round the village and to the house of the hosts where they sing and dance for each member of the family - the host, the hostess and mainly the children. On their way out they do a special song which acompanies them till they reach another house and repeat the custom again.   The celebrated singers from The Mystery of the Bulgarian Voices folk choir directed by Dora Hristova perform these songs with ease as they have grown up with them; they have all played the fascinating games on St Lazar's day or have listened to the koledari and their Christmas songs. With the same ease they do the too complicated arrangements 'invented' for them by the composers who know that they would sing anything, be it even as complex as that.' [extract from notes]


"It's some of the most wonderful music that I've ever heard. I cannot wait to hear them in concert." - Linda Ronstadt

"Every musician that considers himself accomplished should listen to this record and re-think everything he knows." - Graham Nash

"They're like angels... exceptionally pure, really polished. Our song "Uncle John's Band was inspired by the village music of Bulgaria." - Jerry Garcia, The Grateful Dead

"One of my favorite records of the last five years." - Pat Metheny

... and George Harrison recently called this album his favorite recording.

"... the most beautiful music on the planet." - St. Louis Post Dispatch

"Their centuries-old vocal technique has been thrillingly preserved; a kind of pasionate belting, perfectly in tune, that cuts straight to the heart of the enraptured listener." - New York Post

"The hippest show on earth... In a life setting, the varied textures of their voices swirl through the auditorium, leaving the listener breathless and bleary-eyed." - L. A. Weekly

enjoy!
Posted by noisepress at 7:30 AM

Thank you very much for this!